‘The Largest Room in the House’ Chelsea Flower Show 2008

‘The Largest Room in the House’ Chelsea Flower Show 2008 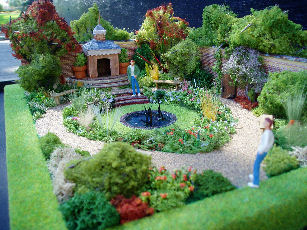 "The Largest Room in the House" designed by Denise Preston and sponsored by GMI Construction, Talbot House and The Royal British Legion

Hard Landscaping for ‘The Largest Room in the House’
Chelsea Flower Show 2008
www.leedsatchelsea.co.uk
Sponsored by Peter Gilman of GMI Property Company Limited, the Royal British Legion and Toc H the Leeds City Council garden will commemorate 90 years since the end of World War 1. The garden design was developed as a cameo of the garden at Talbot House at Poperinghe in Belgium. Known as the ‘Largest Room in the House’, the garden provided an oasis of peace and calm, where soldiers were able to grab some much-needed rest and relaxation between the mud and desolation in the trenches.
The wall which forms the garden boundary on two sides will be as accurate a replica of the original as possible. It’s estimated that the actual wall in Belgium was built in the late 1800s with hand-thrown kiln-fired bricks, hence the extensive cracking and the discolouration. Furness Brick in Cumbria make bricks for restoration projects and agreed to make the bricks after seeing photos of the original. The wall for the Chelsea Flower Show garden will be constructed in "English bond” with one course laid length ways and the next one end ways, built in rustic, cracked, red and purple random coloured bricks.
As the wall approaches its full height of 2.5 metres it will take on a more decorative appearance, with a series of yellow brick bands running through, culminating in one of the upper courses running at 45 degrees to the rest of the wall, this was a feature of the period, and will add to the authenticity. The mortar bond is of a lime texture and colour, in contrast to the red and yellow brick.
At the rear of the garden in the back wall is a small door that led to the air raid shelters in the Belgian garden. This will be replicated, constructed of tongue and groove floor boards with cross members and diagonals to add strength. The door will be left slightly ajar with the area behind it planted up to give a hint of mystery to this aspect of the garden.
Using photographs of the original at Talbot House, a summer house has been recreated by craft joiners from Leeds Parks & Countryside service. Built from softwood and sustainable timber with a sheet lead roof and measuring 2m x 1m and standing 3m tall, it is slightly smaller than the original to avoid looking out of proportion on the main avenue plot. The summer house will be painted with the distinctive dark green and cream stripes still sported by its WW1 predecessor and transported to the Chelsea Flower Showground in early May.
The summer house will be situated at the southern end of the garden, on a raised circular, brick-edged gravel area. Soldiers enjoying time away from the trenches used the summer house at Talbot House to escape the mid-day heat.
The garden will contain four benches placed on the edge of an oval shaped, gravel path. These will be of simple wooden construction, planked seating with solid timber uprights (no back rest). The benches will be around 6 foot long, 1.2 foot wide, 1.6 foot high and will be stained in a dark oak colour and suitably distressed, to replicate the seating in the chapel on the top floor of Talbot House. The benches are being made by Leeds City Council joiners.
‘The Largest Room in the House’ garden will be rebuilt in a prominent location in the City of Leeds after the Chelsea Flower Show as a permanent commemoration to those who fought in the Great War.

Chelsea 2008 – people, personalities and of course the plants

Marshalls’ Darling Buds Get Tv Treatment Ready For May