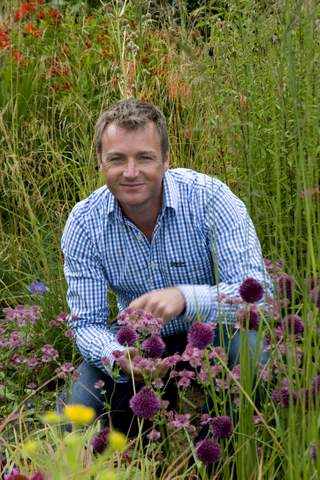 Passionate, inspiring and hugely informed Chris Beardshaw is emerging as one of the leading lights in the world of gardening both as a television presenter and ambassador – breathing new life into the industry with his unique blend of skills and qualifications which embrace planting, garden design and landscape architecture. Fiercely committed to the authenticity of his profession Chris has often said that gardening doesn’t start at 60. “Gardening touches everybody. It’s a great leveler.”
The award-winning gardener, designer, author and lecturer caught the gardening bug at the age of four – thanks to his Gran. Since receiving his first packet of seeds all he ever wanted to do was work with plants. Committed to research and with a deep hunger for knowledge he qualified first as a horticulturalist and then as a landscape architect and was already lecturing and running his own business by the time the broadcasters came knocking on his door. In fact, his TV debut was a mistake as he was told ‘you’ll do’ by a TV crew who were searching desperately for someone to interview at a flower show.
His TV debut was in 1999 on Surprise Gardeners (Carlton TV). He then moved over to the BBC with Real Rakeover, again as the expert contributor. In 2000 he co-presented Gardening Neighbours for BBC2 and was offered a guest position on Gardeners’ World where he quickly established himself as an integral member of the team.
With his fan-base growing as rapidly as his plants, he was offered his own series The Flying Gardener, in which he looked at how a knowledge of surrounding local conditions and climate can help the gardener to select and cultivate plants for their own domestic setting. Highly popular, he went on to record three more series. He also presented two series of the garden history programme, Hidden Gardens, in which British gardens from the past were restored to their former glory.
His Channel 4 debut came in 2005 when he co-presented The Great Garden Challenge. The series, shown three times a week in the afternoons, was broadcast live from the grounds of Blenheim Palace and pitted amateur and professional designers against each other to see who could create and build the best show garden.
Chris has recently joined the Radio 4 celebrated Gardeners’ Question Time team and is a regular contributor to their shows. He also writes a weekly column for the Daily Mail and monthly articles for Period House. His literary skills have also been employed by The Garden Writers Guild as a judge for the award’s in 2005 and 2006.
As an author he has written The Natural Gardener (2003), in which readers learn how to develop gardens that are in tune with nature, where plants will flourish with minimum effort. There are also two books out based on his television series Hidden Gardens. His new book published by Dorling Kindersley called ‘How does your Garden Grow?’ will be released May 2007.
His integrity and wealth of experience has been recognised academically and Chris was recently awarded an Honorary Fellowship of Cheltenham and Gloucester University – making him the University’s youngest ever fellow. He has cemented his local links with the University by becoming a regular lecturer in Landscape Architecture and has also just been appointed external examiner for University College Falmouth.
As if that doesn’t keep him busy enough he also runs a private design and consultancy practice, undertaking projects from small private gardens right up to public reclamation schemes and has a healthy crop of medals, including Gold and The RHS BBC People’s Choice Award for his 2006 Chelsea Show Garden. 2007 sees him producing no less than 3 major show gardens (Malvern’s official show garden, Chelsea and Hampton) all of which have a strong educational emphasis and is something that is close to Chris’s heart. It is not only the well publicised show gardens that captures Chris’s interest though as he is a regular and popular contributor at The Sandringham Flower Show where he lectures and judges the show gardens and he has also agreed to become an ambassador for the prestigious Shrewsbury Flower Show which is held in August – where again he is judging the show gardens.
He also finds time for charity and ambassadorial work, particularly with The Woodland Trust, The Salvation Army, The Environment Agency and The National Lottery.

You can find out more on Chris’s website – www.chrisbeardshaw.com

Award winning garden designer Chris Beardshaw is heading off to New Zealand to create the largest exhibition garden ever seen in the 15-year history of the Ellerslie International Flower Show in Christchurch.

Ellerslie, which takes place from 10-14 March 2010, is considered the equivalent of the RHS Chelsea Flower Show in New Zealand, with over 100 exhibitors and 30 gardens. Chris has been invited by the organisers to produce a quintessentially English Garden for this year’s event.

Stretching 12 metres across the shore of Victoria Lake, the garden will extend 64 metres into the Hagley Park showground and is guaranteed to be a real show-stopper, with almost 10,000 plants, including 4500 annuals and 3000 herbaceous plants. The magnificent garden entitled “An Englishman’s Retreat” will be filled with colour and fragrance, making it a real feast for all the senses.

Chris is renowned for his formal English garden designs, having won nine Gold and Silver Gilt Royal Horticultural Society (RHS) medals. Chris is delighted to be attending the Ellerslie Show for the first time. He said, “This show has a great reputation internationally. Our garden is not only the show’s largest ever exhibit but it is the largest show garden I have ever created too.”

The garden will be positioned between two grand Poplar trees on the shore of Victoria Lake, borrowing from the surrounding landscape to make the garden look like it goes on forever. The garden will have multiple viewpoints but one main axis.

Chris continued, “You will stand with your toes being tickled by the herbaceous perennials looking through a formal garden with a grand lawn leading down to a Victorian portico with classical references.”

“The borders are 3.6 metres wide, punctured with trees and shrubs so as you look towards the lake there will be a kind of rhythm in the way the structure unfolds. Underneath will be a swath of tapestry planting combinations. It’s a great challenge to create something so large and with so many plant combinations but I will be heading out to New Zealand in mid- February to start the build and I am really looking forward to the experience.”

Chris had previously visited Ellerslie in November to see the show ground site and meet the contractors who will work with him on the garden. He also took the opportunity to visit several local nurseries to assess what plant material was available.

He said, “This was a very interesting exercise as many of the plants I would generally like to use in a large herbaceous scheme, such as geraniums and Lupins, are not grown in New Zealand. I also had to review my idea for hedging to enclose the garden. The instant tall hedging often used for show gardens in the UK is just not available in New Zealand. They have almost perfect growing conditions for hedges to naturally grow and establish very quickly, so there is no demand or need for an instant effect. Consequently, I have had to review my planting lists for this design which has created a great opportunity to use locally sourced plant material and to experiment with different species I may not have tried before. “