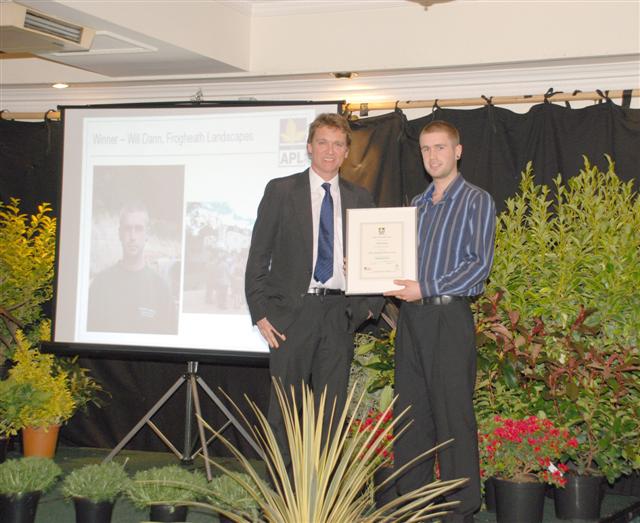 Nineteen year-old Will Dann, a landscaper from Association of Professional Landscapers (APL) member Frogheath Landscapes, has been named as the Apprentice/Trainee of the Year at Horticulture Week’s Landscape and Amenity Awards 2008 and incredibly also went on to win The APLs Young Achiever of the year 2009.
Since leaving school three years ago Will has tackled an apprenticeship at Plumpton College and notched up an HTA Training Award – achieving the best ever mark as a candidate for this award.
Will’s employers Alison and Stephen Moody from Frogheath Landscapes in Burwash Weald, East Sussex, explain, “When Will joined us he thought he wanted to work outdoors. With time and thorough training he showed a willingness to learn and become a solid part of the team, developing technical and people skills. Will has found success by listening and learning at college and attacking his work placement with true grit and reliability.”
They add, “At a time when it is easy to criticise young people in our industry he is a shining example of what can be achieved. He has blossomed into a very skilled, highly valued member of staff with an outstanding commitment to the industry.”
APL Chairman, Adam Frost, commented, “It is extremely good news to see a young landscaper win this accolade. Will is a great ambassador for the landscape industry and hopefully his determination and enthusiasm will encourage other young people to consider landscaping as a profession.”
Will was thrilled to accept his well deserved award saying “I am really pleased, I have never won anything like this before and it’s great to be rewarded for the hard work that Frogheath Landscapes and I have put in to my training. It was nice that Paul Ross came and spoke to me afterwards too”
Will was presented with his award by TV presenter Paul Ross at a ceremony at the Royal Garden Hotel in London in October last year and by The APL in February of this year .
For further information about APL membership or Frogheath Landscapes see:- www.landscaper.org.uk and www.frogheath.co.uk